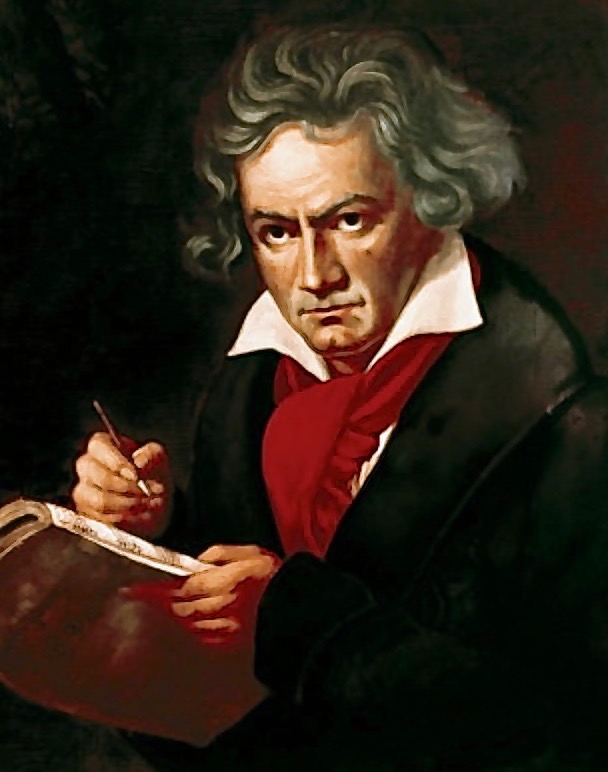 wrote the great composer Ludwig van Beethoven about his own deafness.

In 1976 sadly, it was true that many children with this invisible handicap were still living in an isolated world of silence. Curiously, it was soon discovered that MUSIC would play an increasingly important role in improving their means of communication.

How did it start and how did it work?

The Beethoven Fund for Deaf Children is the brainchild of music educator, Ann Rachlin, whose Fun with Music concerts for hearing children were attended by thousands all over the country. The Fund was her way of helping deaf children who could never have the Fun with Music that her hearing pupils enjoy.

Founded in 1976, The Beethoven Fund functioned under the umbrella of The National Deaf Children’s Society, but in August 1981, it became a fully independent registered charity.. Ann’s first idea with her pupils was to encourage children who hear to help children who can’t. By 1981, Ann had become aware of the importance of music in helping hearing-impaired children communicate through a highly specialised music speech therapy. Dedicated to helping hearing-impaired children learn to communicate, Ann inspired many great musicians and actors of the world to perform for the benefit of the Fund, donating their services to help deaf children – in Beethoven’s name.

Applications for assistance were made to the Fund through schools for the deaf, partial hearing units and teachers of the deaf. 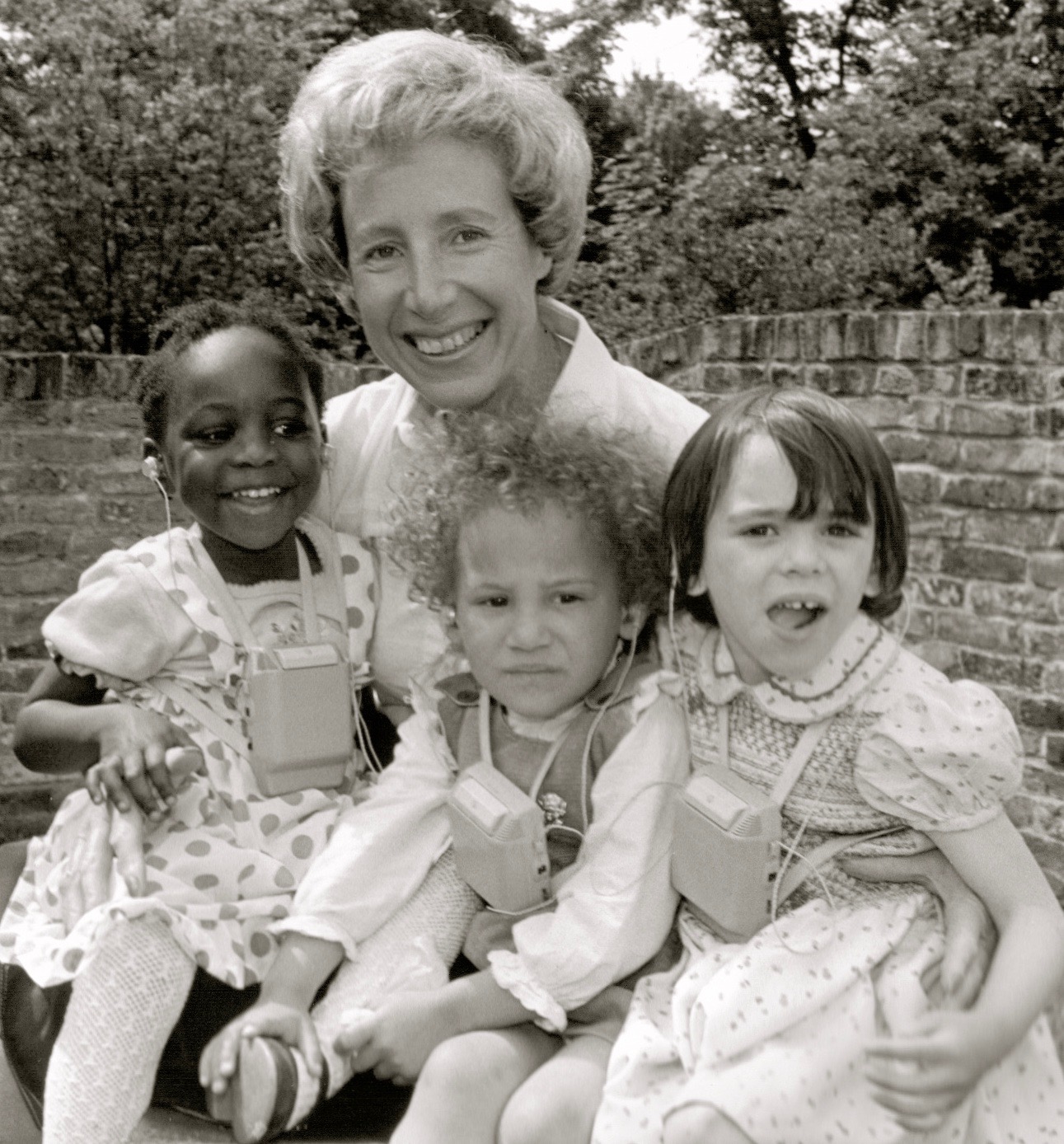 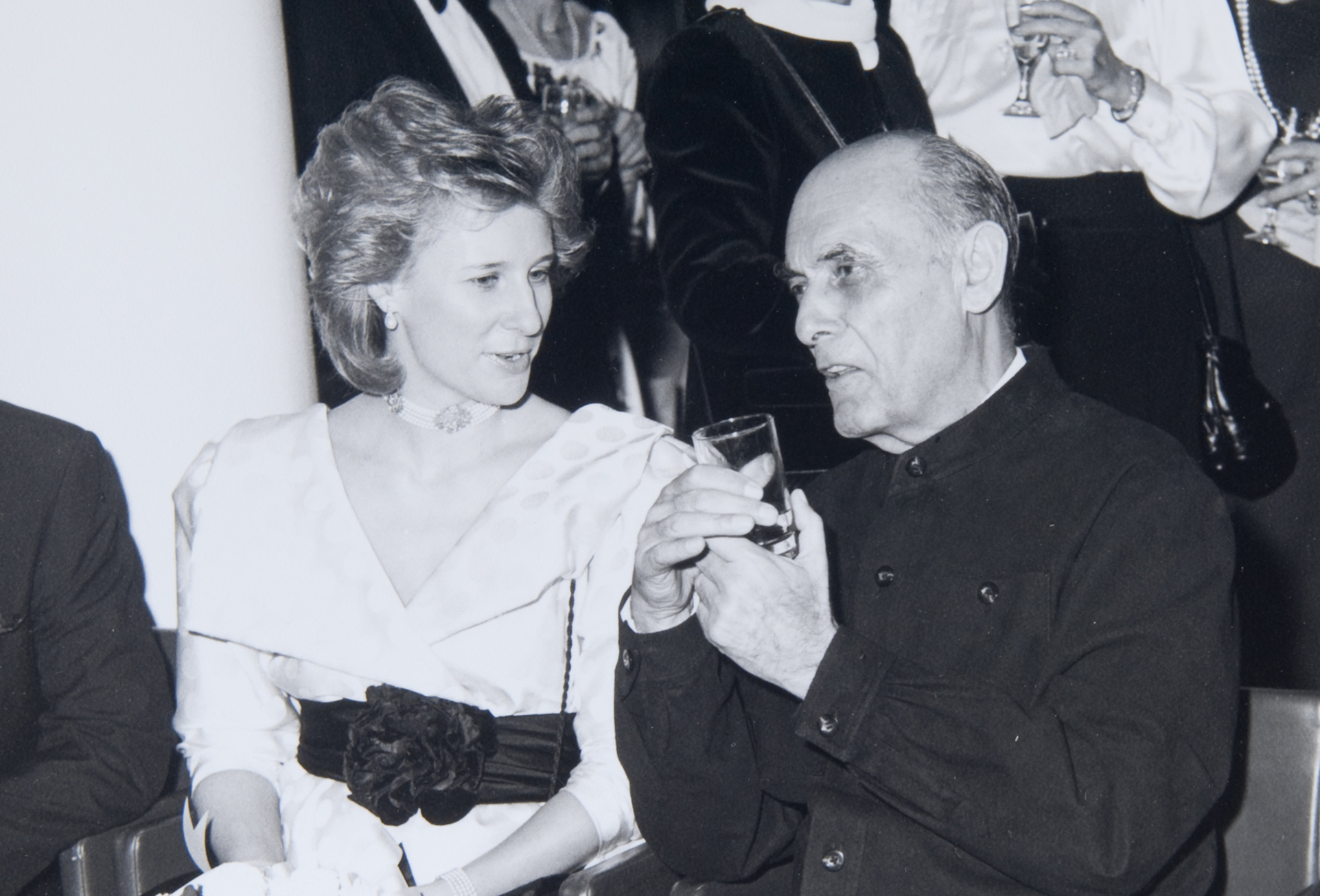 were used to help hearing-impaired children reproduce the rhythm and melody of speech and language and so develop their powers of communication. Music and spoken language offer so many points of resemblance that the basic elements of music can be employed as a means of teaching the hearing-impaired and other handicapped groups to use their voices in a more normal and acceptable way and thus improve their communication with the hearing world. 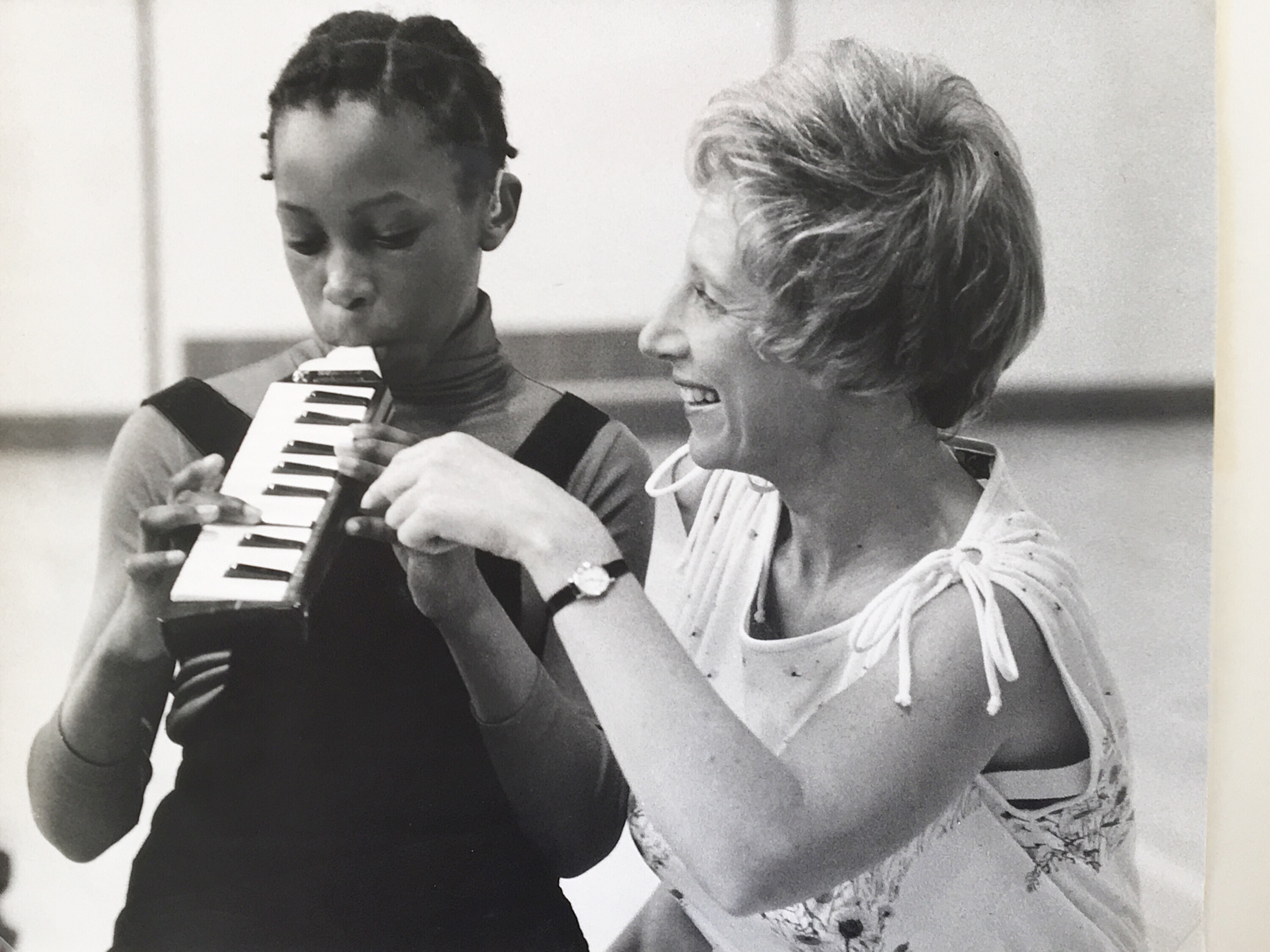 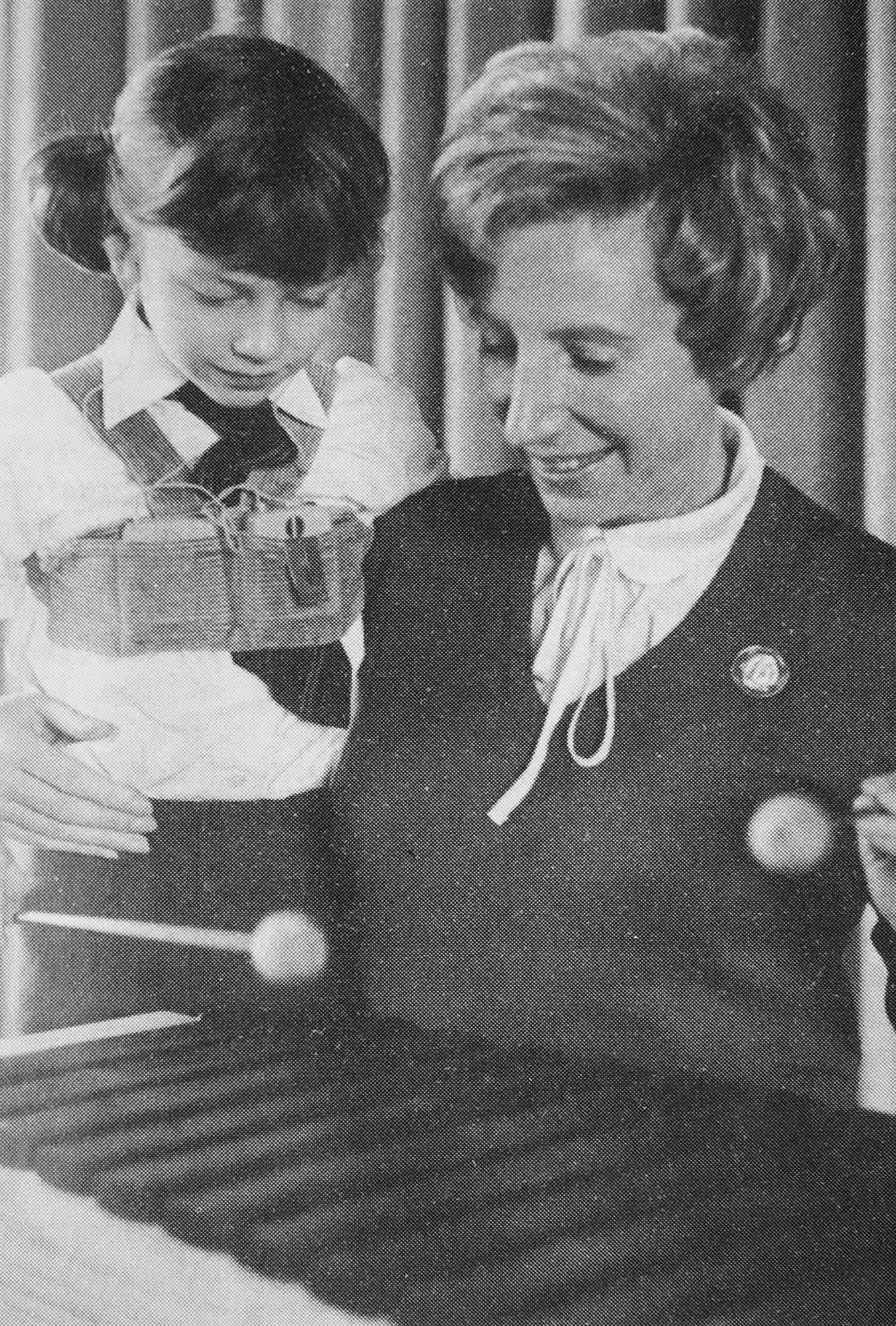 The Beethoven Fund supplied these special instruments for use in schools, thereby relieving financial pressure on already over-extended public resources. Regional workshops to provide teachers with information on the latest use of the instruments demonstrated by leading specialists, were regularly organised and paid for by the Fund. 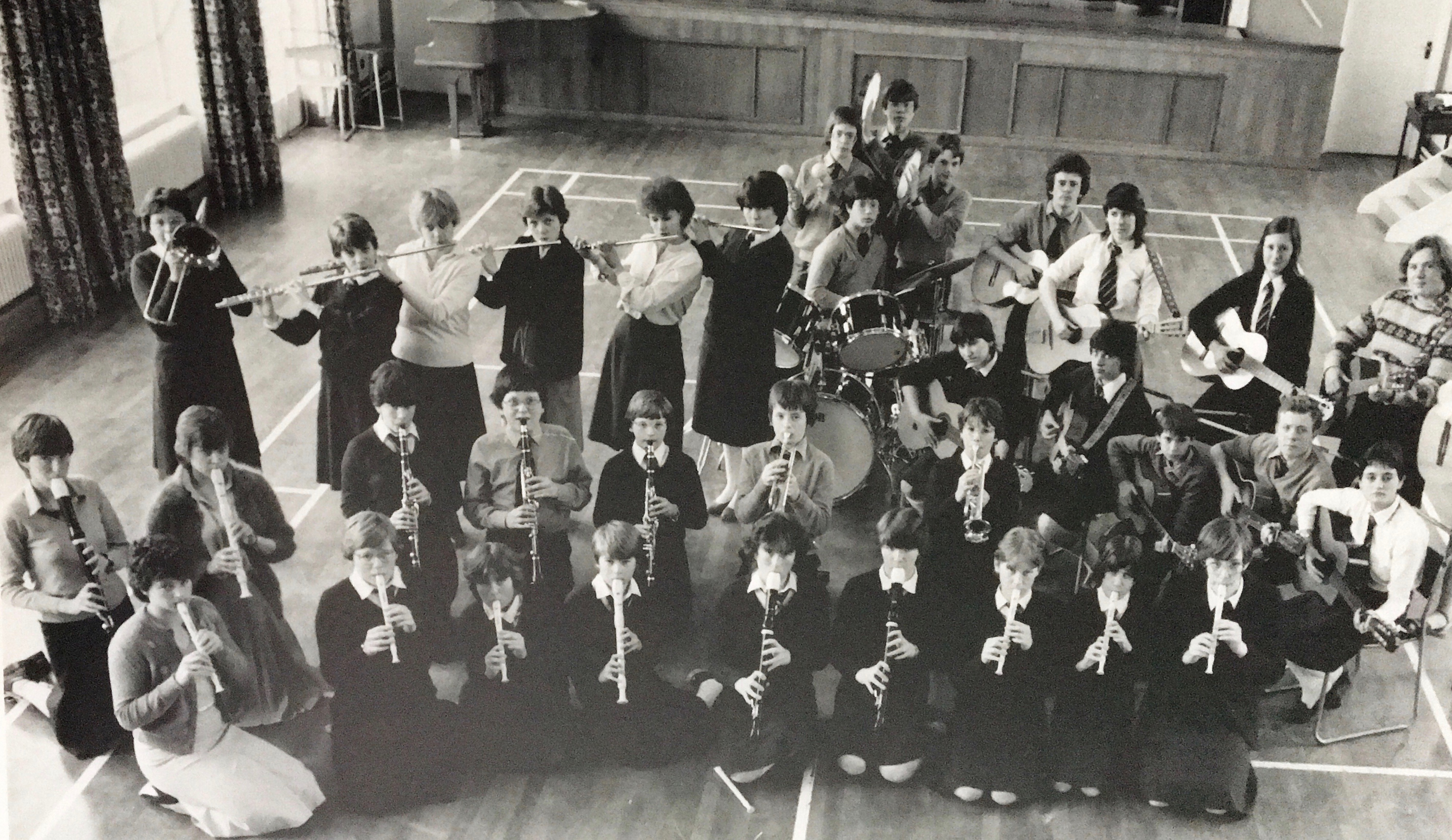 When Ann first visited The Mary Hare Grammar School for deaf children in Newbury (pictured above), she was astonished to find that the children there were not only enjoying music but were actively involved in making music.

It soon became obvious that music and speech were linked and that a deaf child could be taught to pitch his or her voice with the help of specially designed musical instruments.

Breath control was often a problem for a deaf child but learning to play a wind instrument showed them how to control their breathing in order to make a sustained sound. The natural rhythm of speech could also be taught using tone bars.

A set of tone bars resembled a dismembered xylophone.

Each bar represented one note of the musical scale. 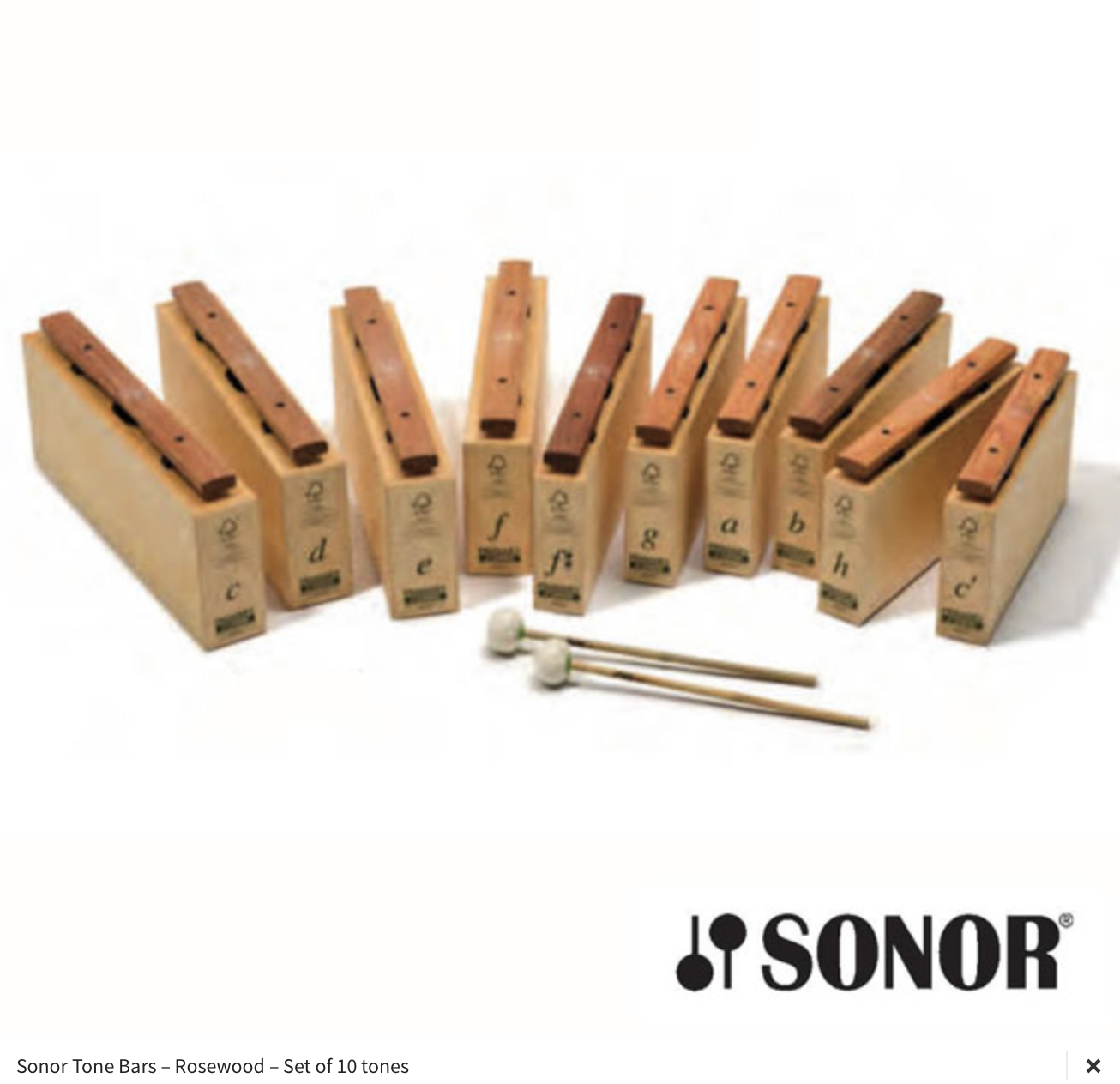 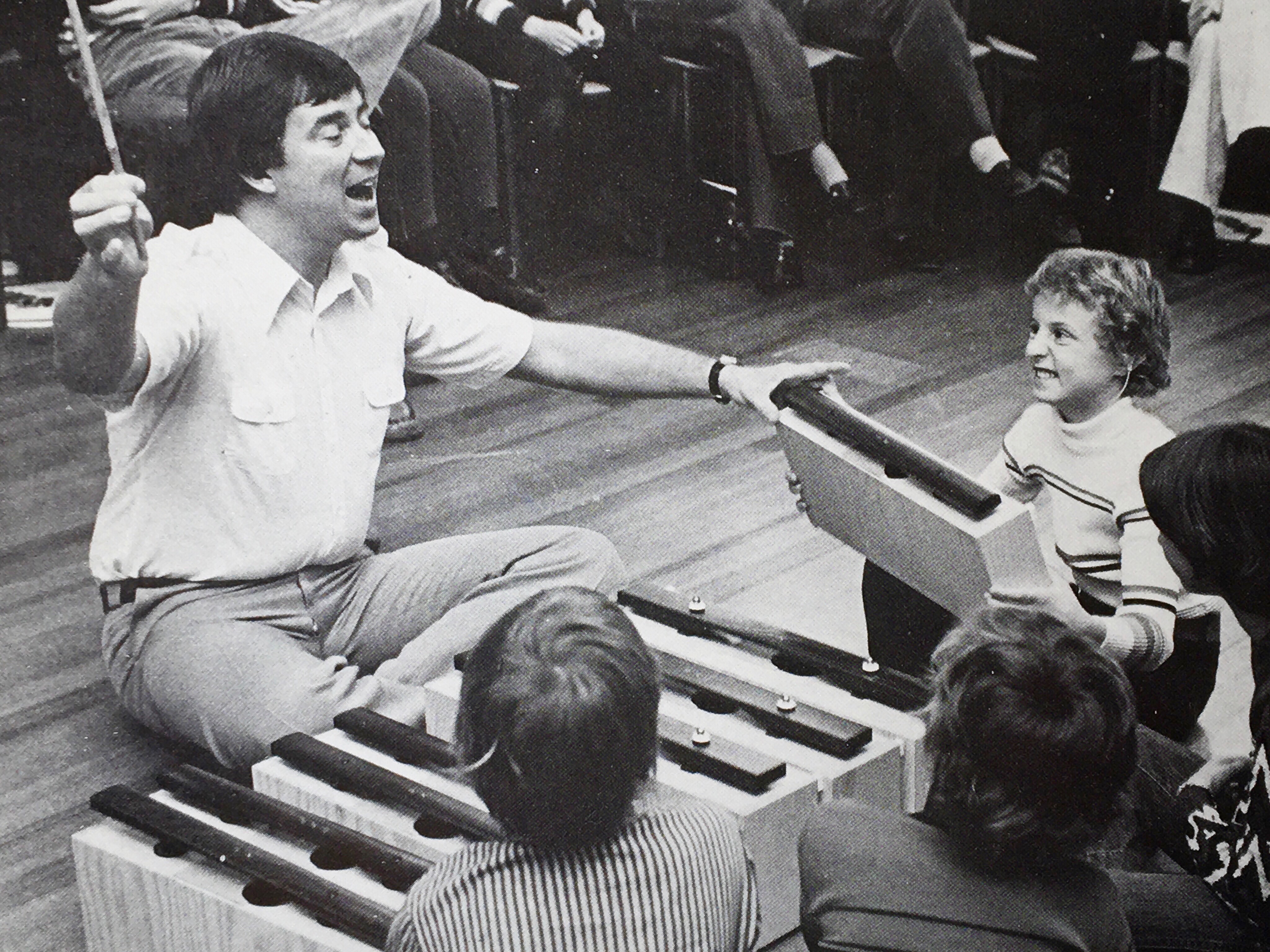 When Ann Rachlin heard of the work of the eminent Danish music therapist, Claus Bang, she made contact with him and soon was witness to the incredible success he had in using the tone bars and drums together with the piano, in his exclusive musical speech therapy programme. With the tone bars, Claus Bang was able to find the natural pitch of the child’s voice and then, with the additional help of songs and dances and loads of patience, the children’s voices and speech quality were lowered or raised and improved as they learnt to speak in a reasonable well modulated voice. 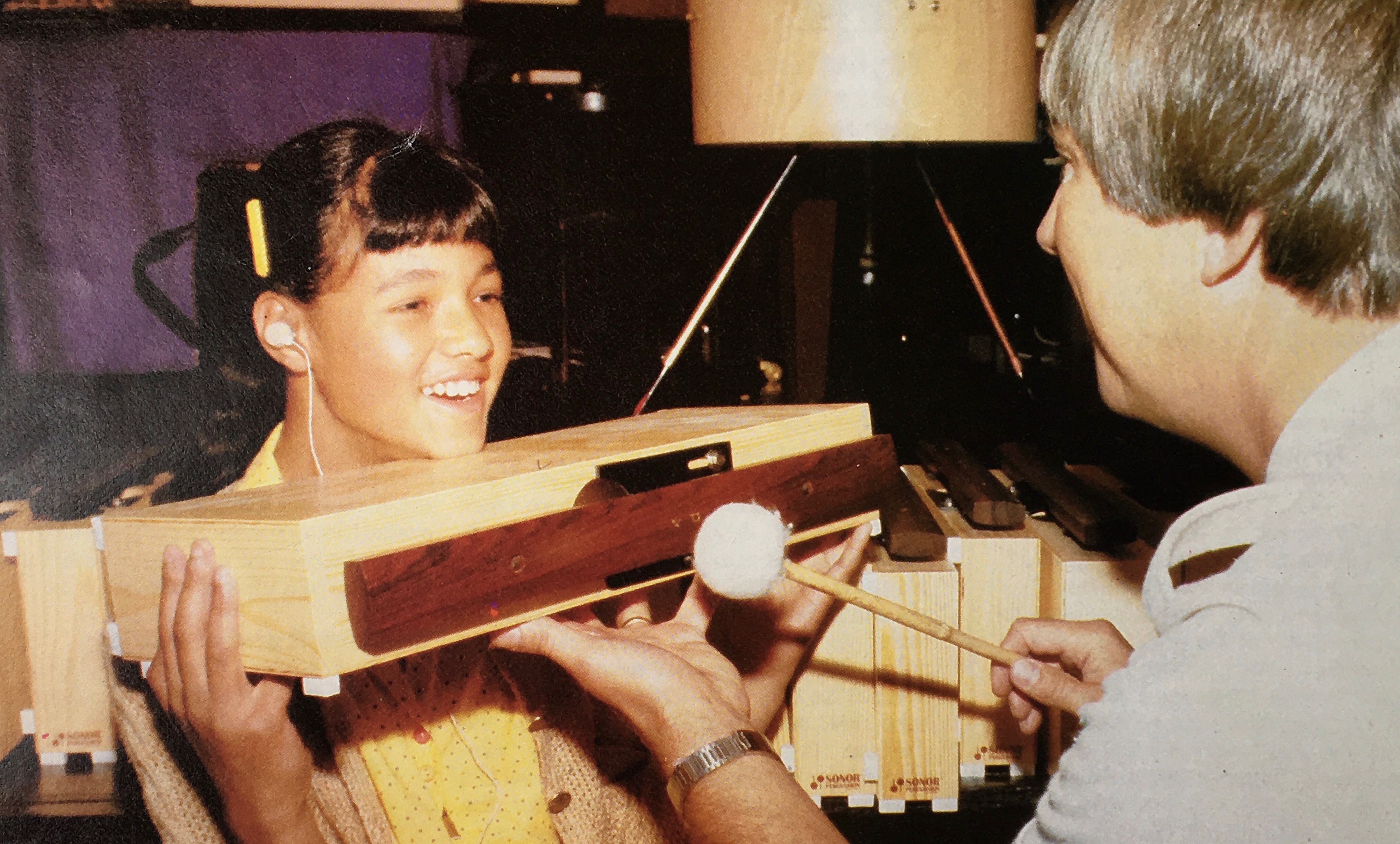 How the monies were raised 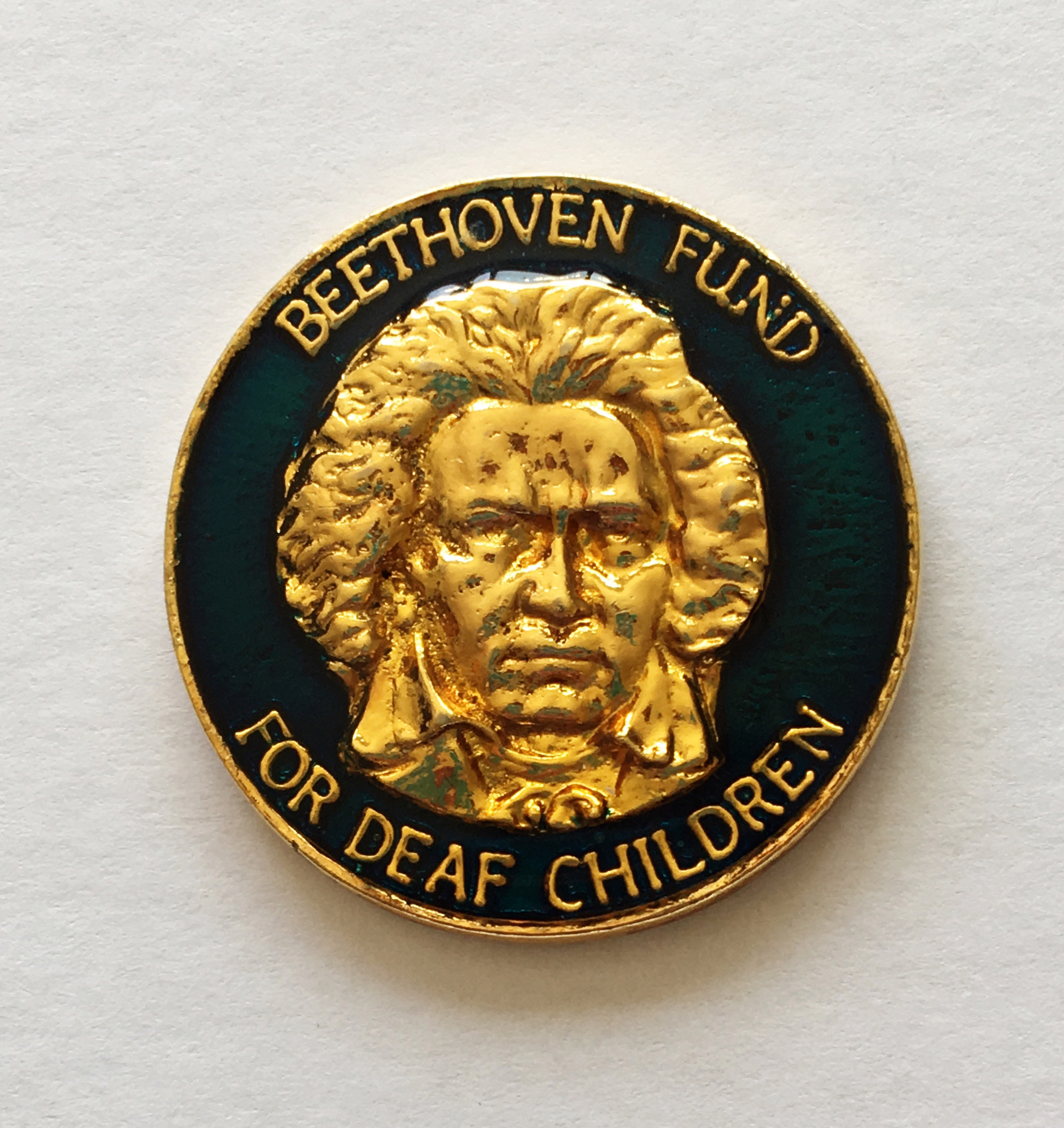 A beautiful enamelled badge was sold at all Beethoven Fund concerts and events as well as by hearing children wishing to help hearing-impaired children and by music teachers who used them as rewards for their pupils.

The emotive idea of music and Beethoven helping deaf children to learn to speak and communicate through music, spoke volumes to audiences and the result was always both an artistic and financial success.

The first major fund-raising event was on March 6th, 1980. Lorin Maazel was the first world-famous musician to respond.

Just as he was about to leave his dressing room at the Royal Festival Hall for a performance of a Beethoven symphony, a letter in a blue envelope was handed to the conductor. The letter urged him to spare a thought for the children who could never share the joy of great music, for they, like Beethoven, were deaf. Like most musicians who receive Ann’s letter appealing for help, he responded most generously. But Lorin Maazel went further. He wrote

”Do send me some material about the Beethoven Fund for Deaf Children. I might just consider some day conducting a Beethoven concert for the benefit of these disadvantaged little ones.”

I have not forgotten the proposal regarding a benefit concert for The Beethoven Fund for Deaf Children. In fact, I have been thinking of celebrating my 50th birthday for and with your wards. March 6, 1980 is the date, venue Festival Hall, orchestra Philharmonia, program — well —- all Beethoven!” 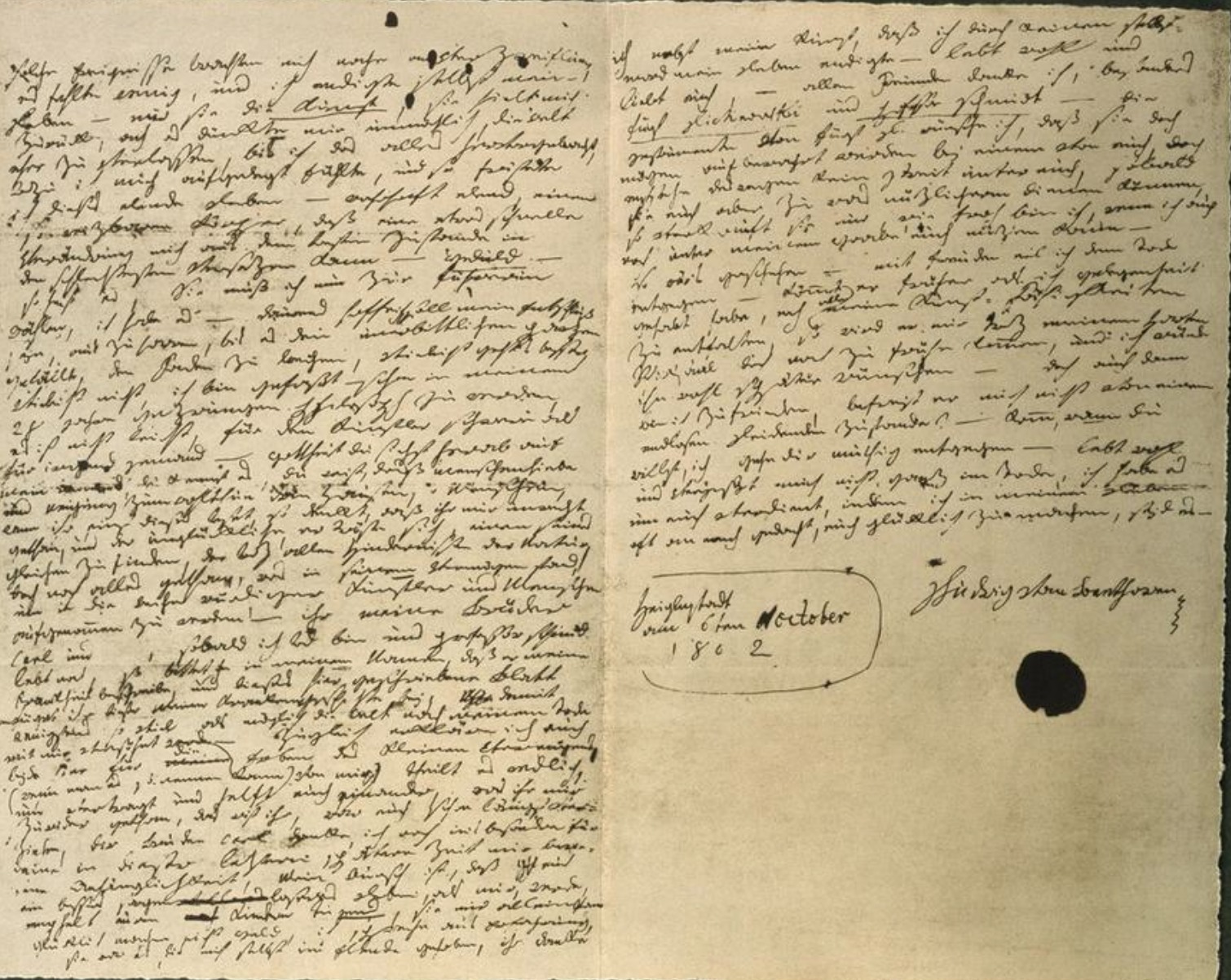 Overwhelmed by this magnificent offer, Ann determined to make it worthy of Maestro Maazel’s generous gesture. She suggested that it would be particularly moving if Beethoven’s Heiligenstadt Testament was read by a world-renowned actor at the start of the concert. Maazel agreed and Sir Peter Ustinov accepted the invitation. 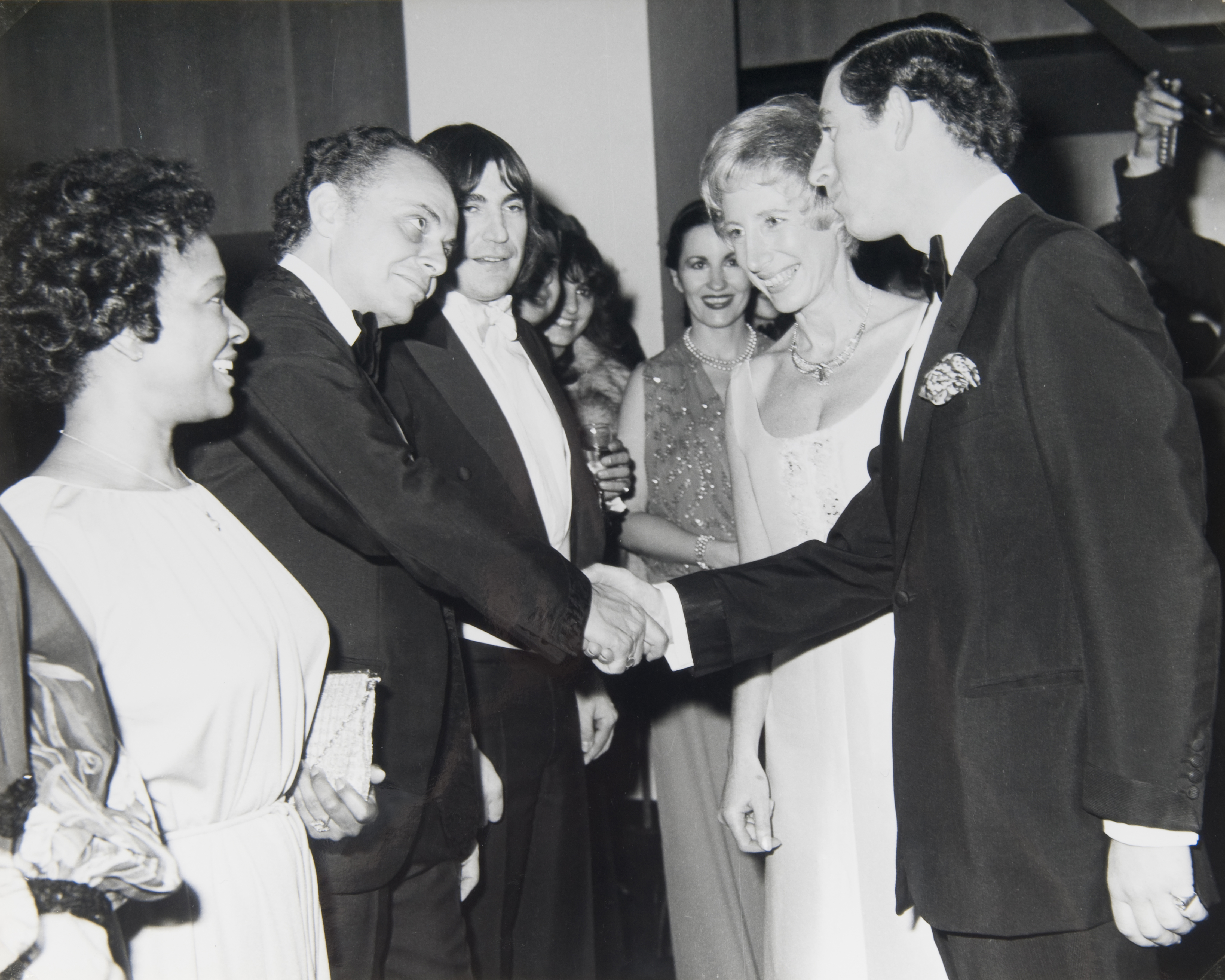 Ann then wrote to HRH The Prince of Wales, describing the generosity of Maazel and Ustinov and explaining that The Beethoven Fund was a small new charity. Prince Charles accepted her invitation to attend the concert.

When Maestro Maazel came on stage, he conducted the orchestra in the Benjamin Britten arrangement of the National Anthem. The lights dimmed and the spotlight fell on Peter Ustinov seated in the woodwind section of the orchestra. Reading the Heiligenstadt Testament, he became the very persona of Ludwig van Beethoven. The heart-rending description by the great composer of his anguish on becoming deaf, moved the audience to tears. By request, at the end there was no applause, Lorin Maazel lifted the baton and the first moving bars of the Missa Solemnis filled the auditorium.

Peter Ustinov as Beethoven in his play “Beethoven’s 10th” 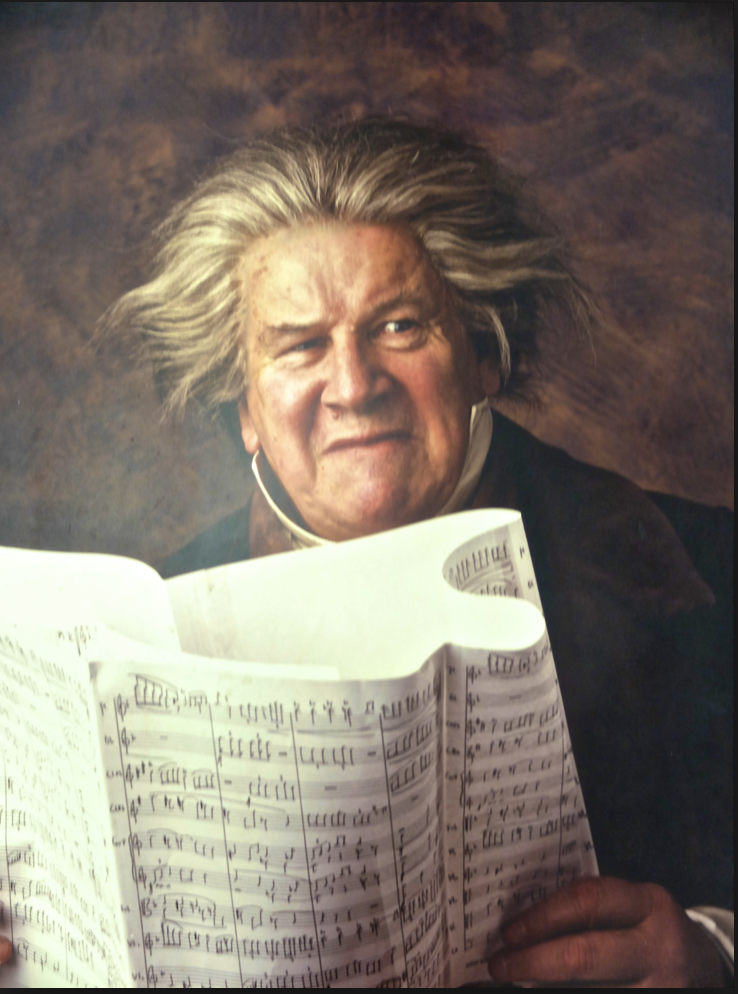 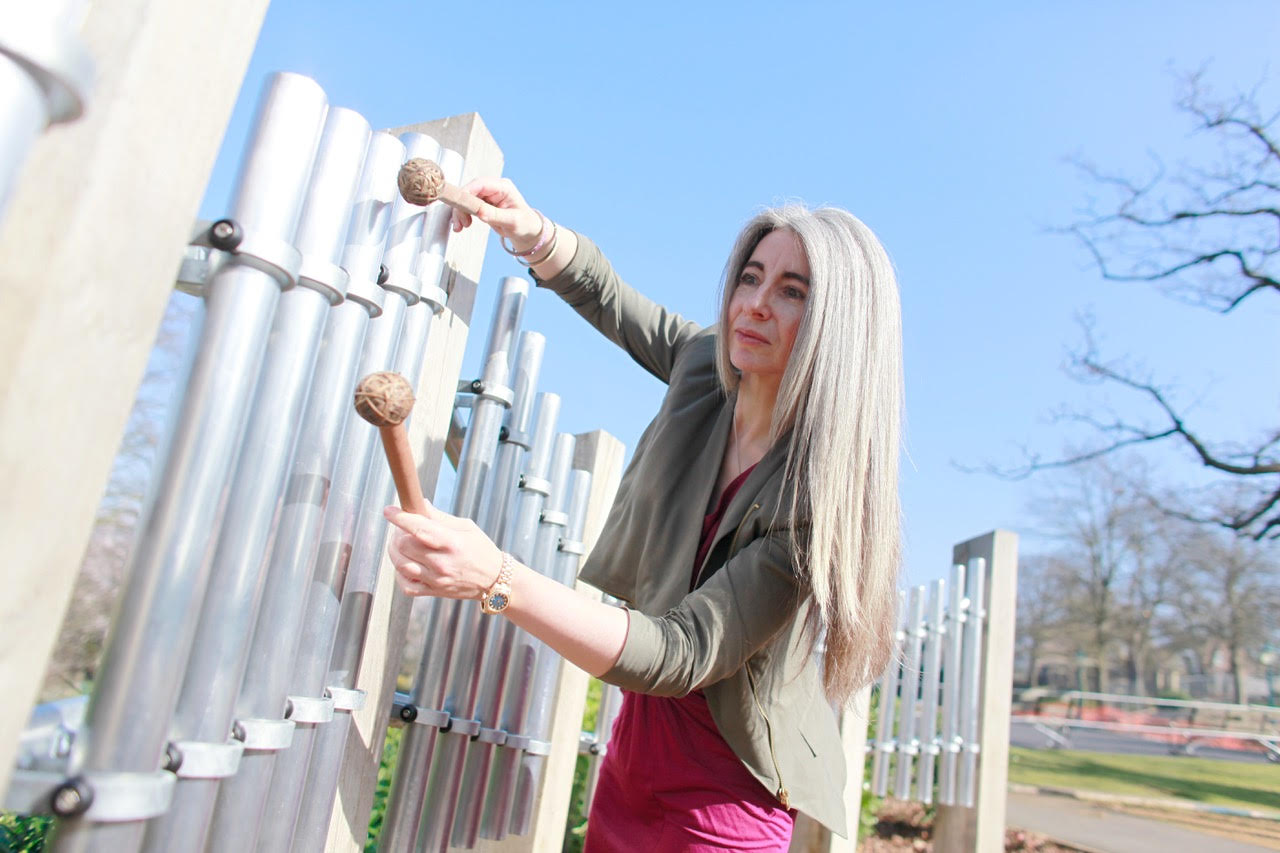 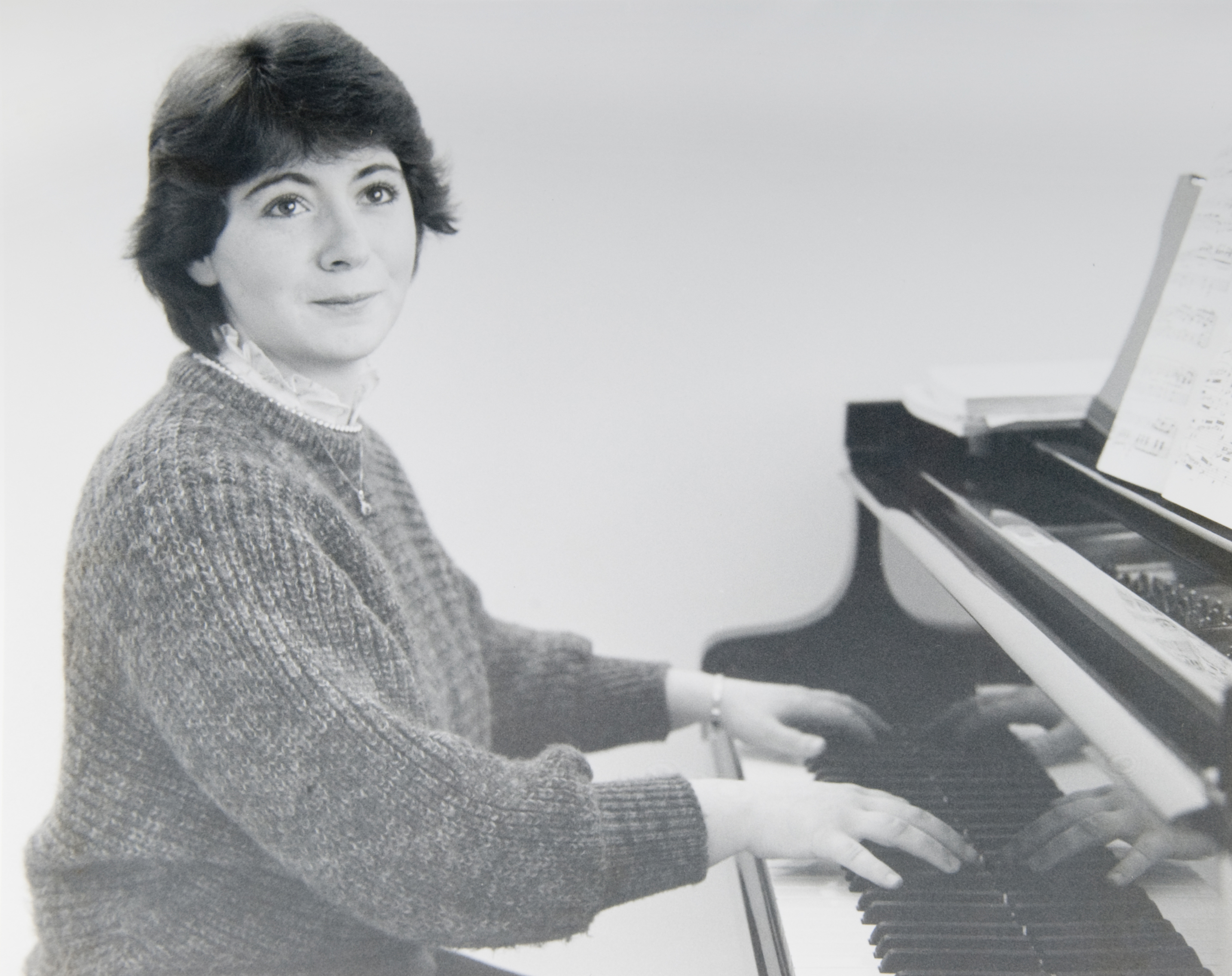 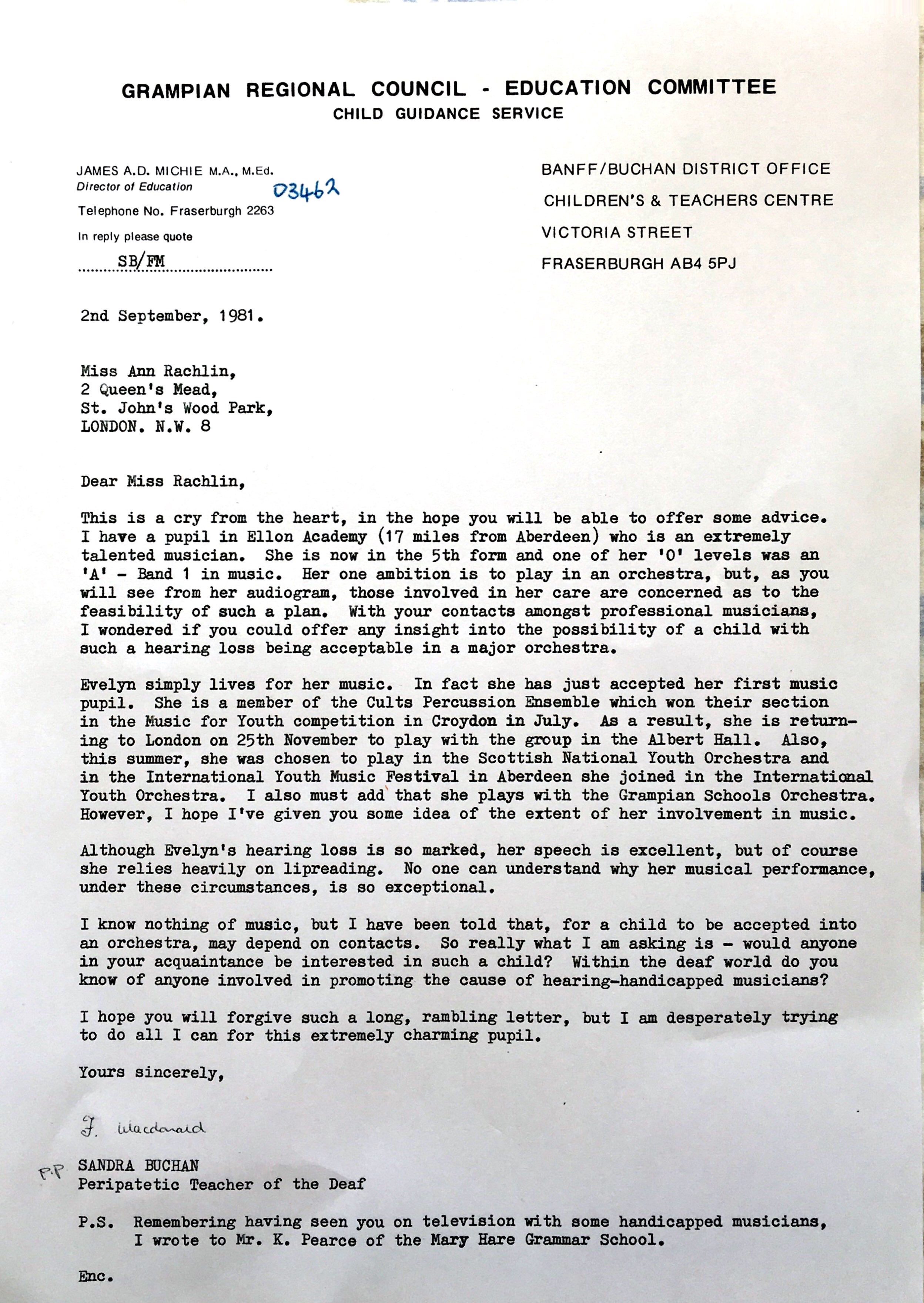 The concert reception was televised and watching the broadcast on the news, Sandra Buchan, a peripatetic teacher of the deaf in Scotland, was inspired to write a letter to Ann Rachlin about her gifted young deaf pupil. Her letter began “This is a cry from the heart”.

That young girl was Evelyn Glennie. The ‘cry from the heart’ was heard by Ann and the rest of the story is legendary. Dame Evelyn is the first person in history to successfully create and sustain a full-time career as a solo percussionist, performing worldwide with the greatest orchestras, conductors and artists. She played the first percussion concerto in the history of The Proms at the Albert Hall in 1992, which paved the way for orchestras around the world to feature percussion concerti. She had the honour of a leading role in the Opening Ceremony of the London 2012 Olympic Games.

Evelyn regularly provides masterclasses and consultations designed to guide the next generation. She is also a leading commissioner of over 200 new pieces for solo percussion for many of the world’s most eminent composers. The film ‘Touch the Sound’ and her enlightening TED speech remain key testimonies to her approach to sound-creation.

Evelyn was awarded an OBE in 1993 and now has nearly 100 international awards to date, including the Polar Music Prize and the Companion of Honour. Evelyn continues to inspire and motivate people from all walks of life. 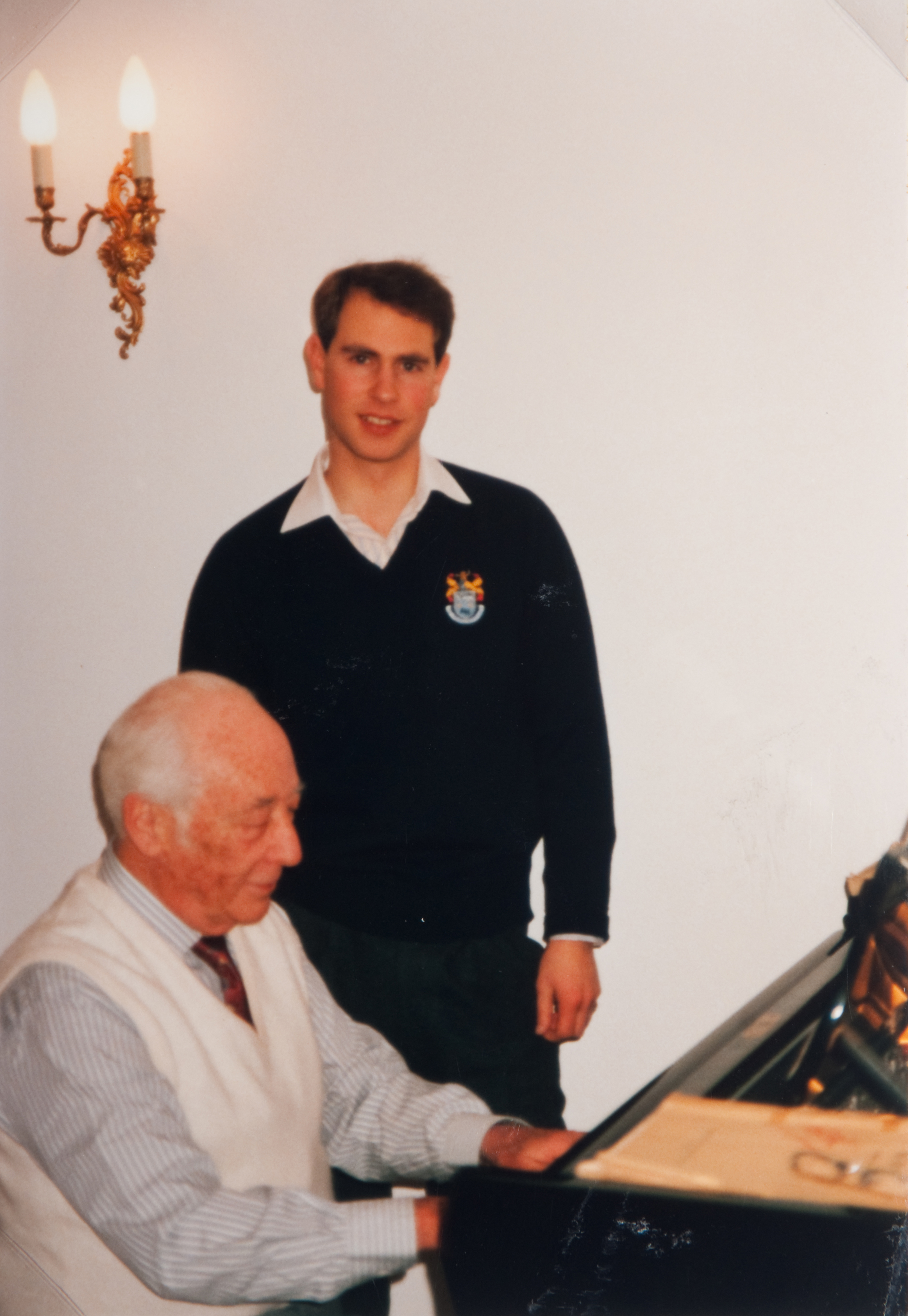 Prince Edward was unique in that he not only came to the concert, but performed on stage, narrating “Peter and the Wolf” with the London Symphony Orchestra conducted by Ezra Rachlin. He also came to the Rachlin’s home in St John’s Wood on three consecutive Fridays to rehearse. 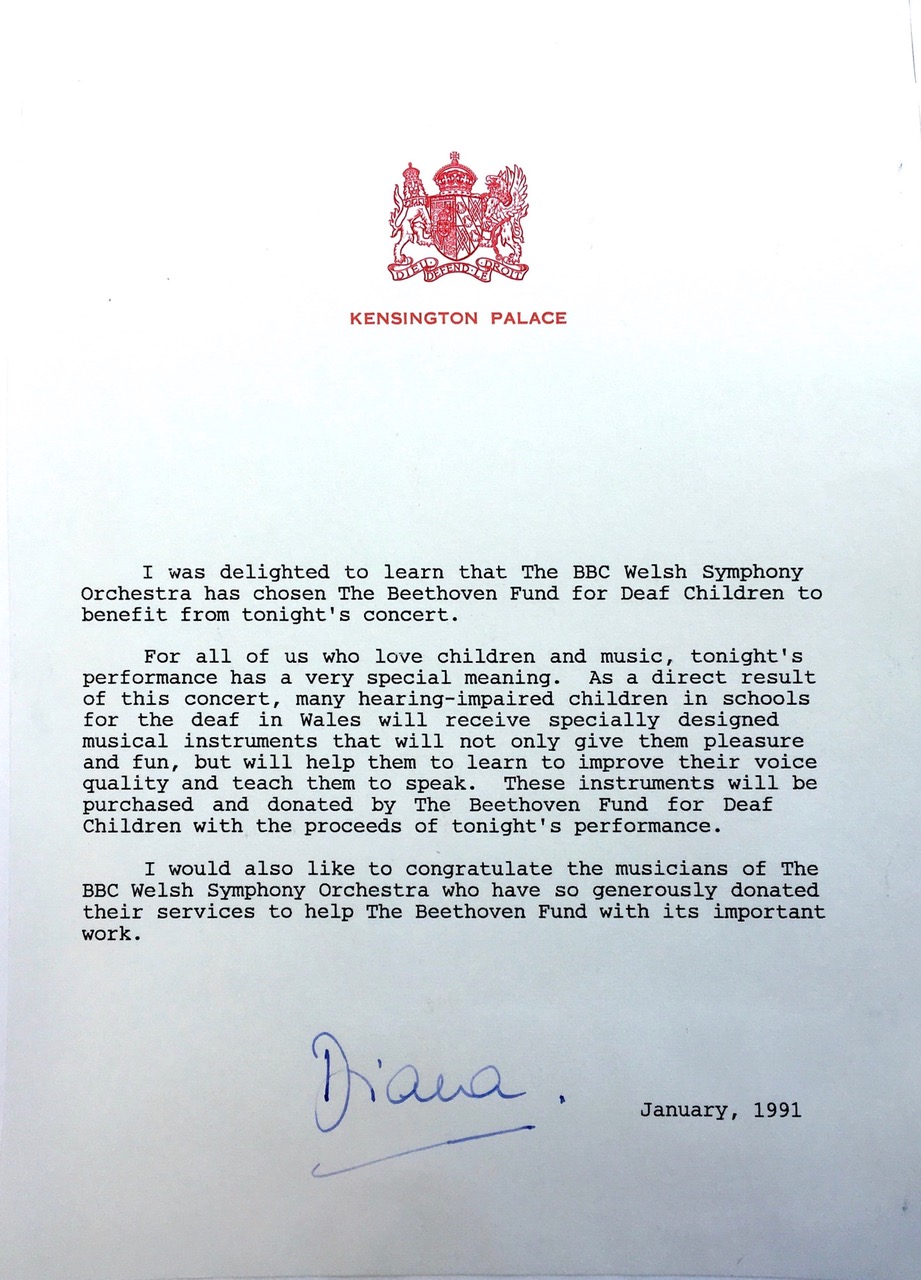 Diana, Princess of Wales was also a keen supporter and lent her name to many Beethoven Fund events. 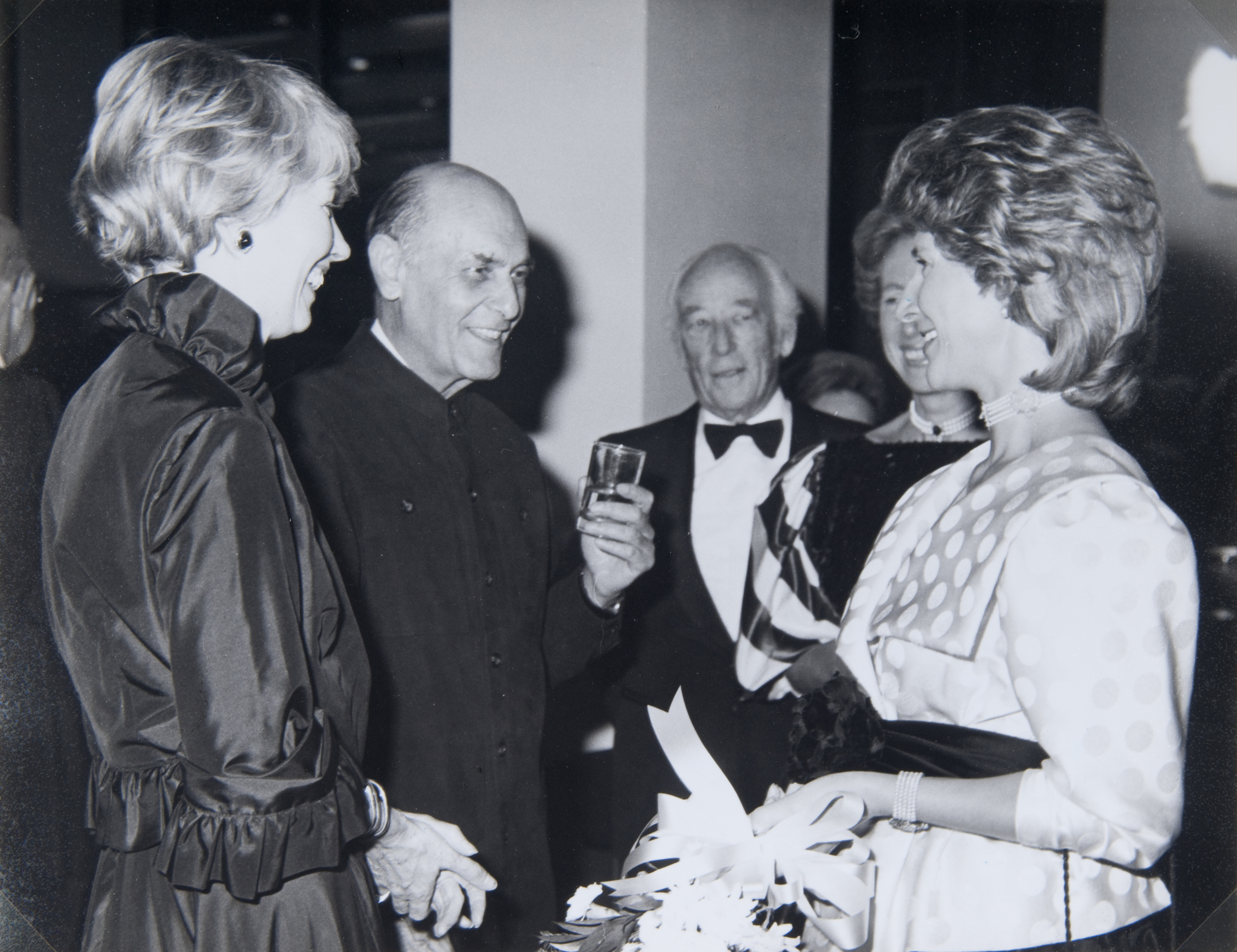 The Duchess of Gloucester with Sir Georg and Lady Solti 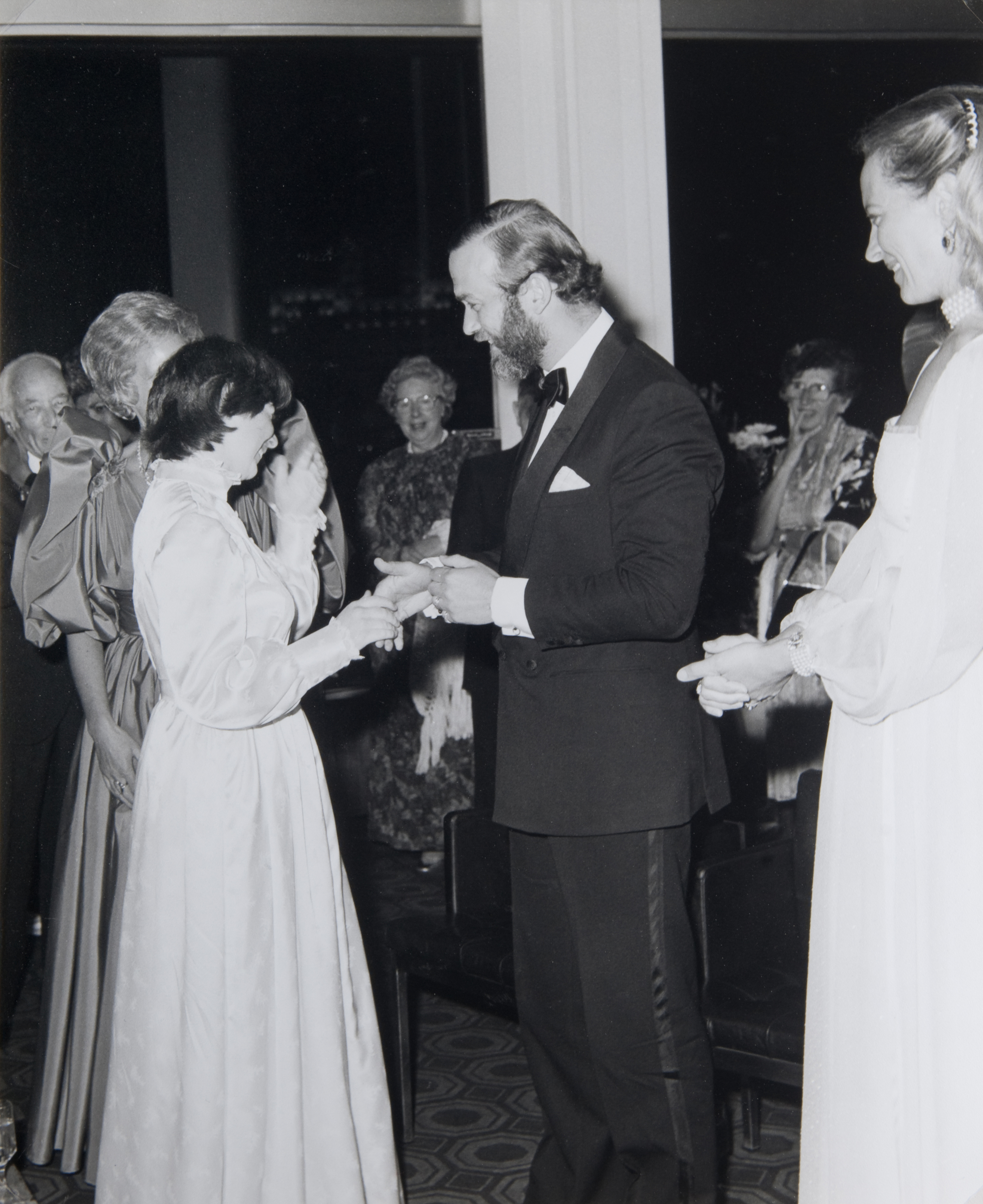 TRH Prince and Princess Michael of Kent with Evelyn Glennie

Performers who donated their talents 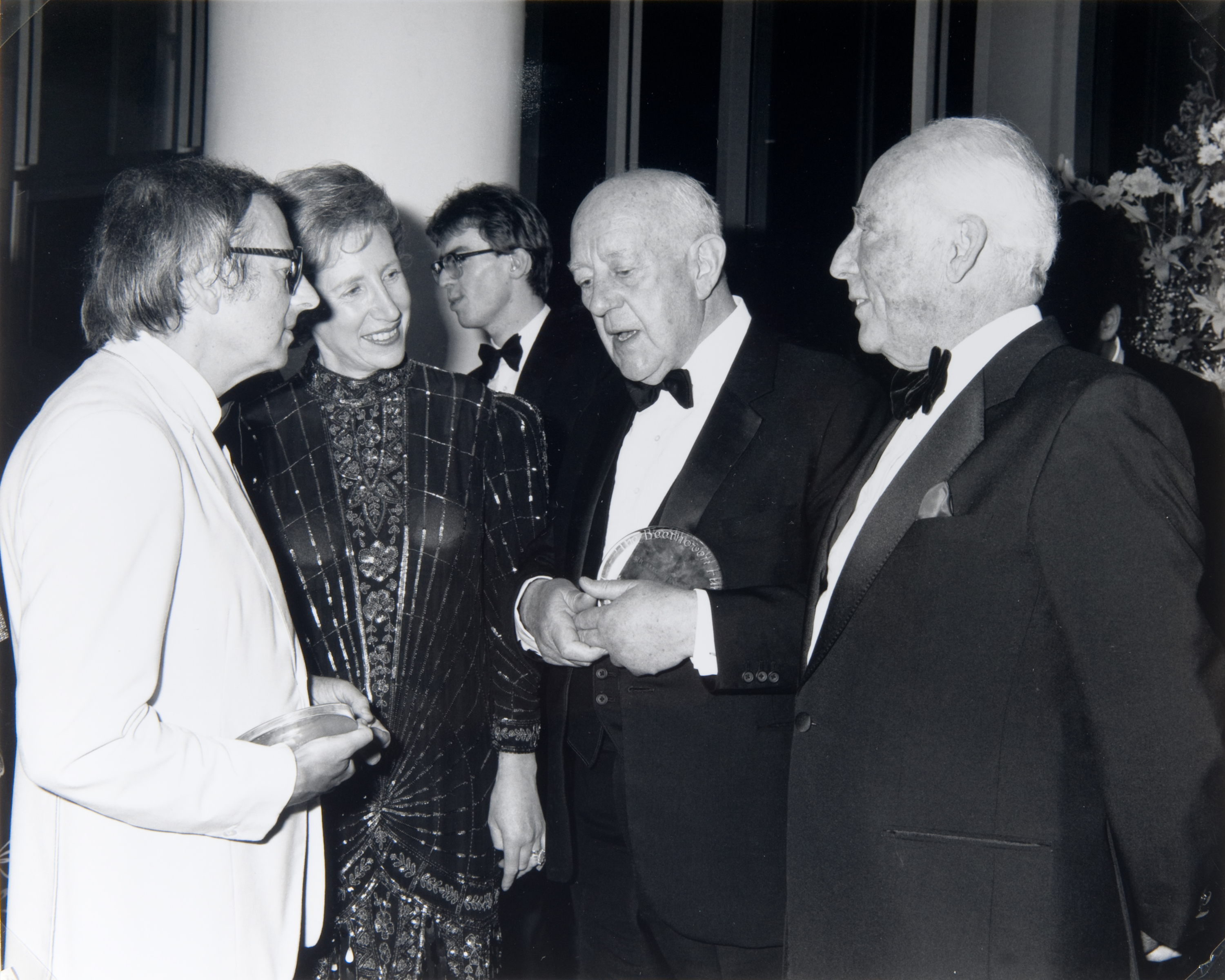 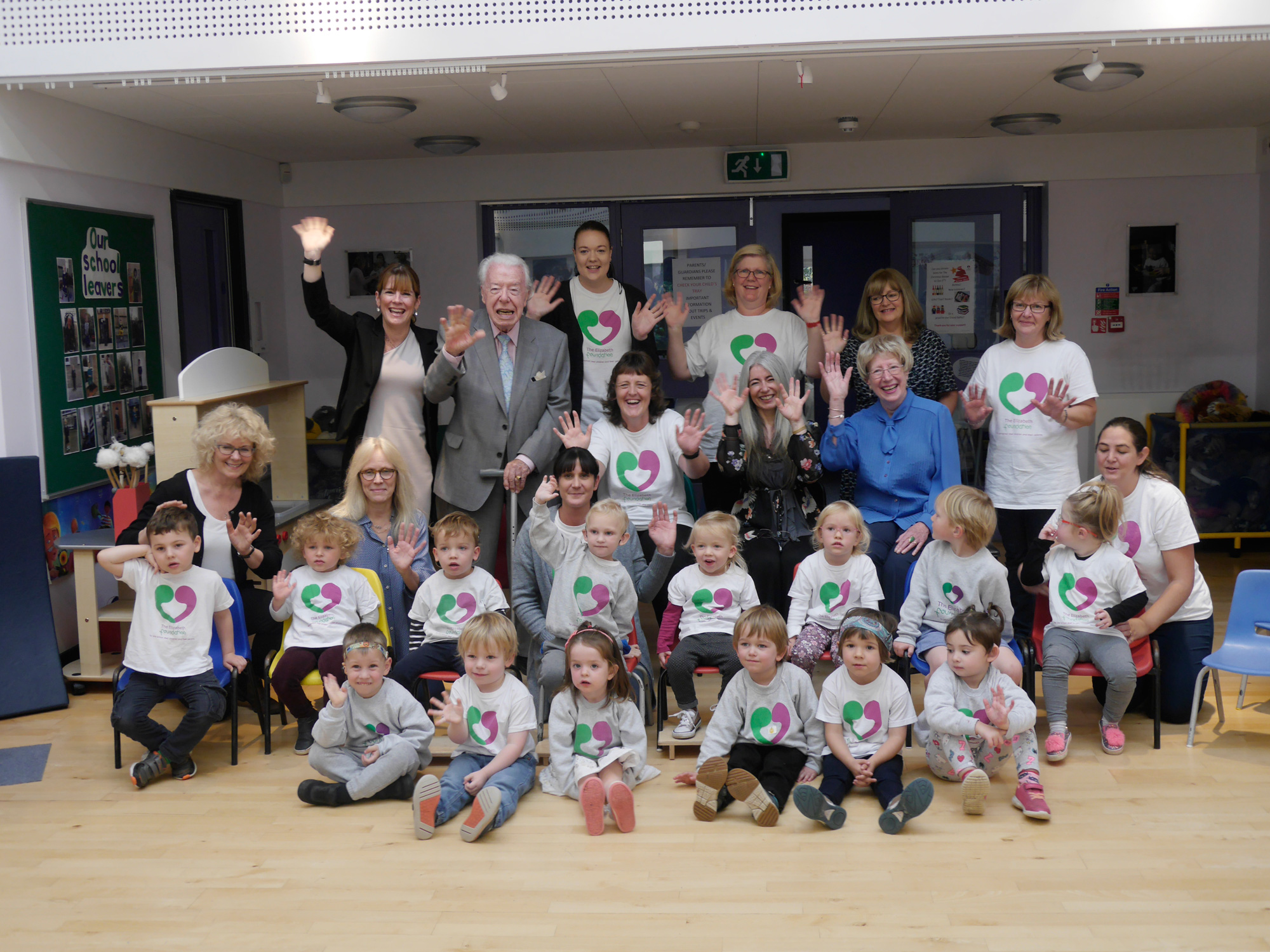 Ann ran The Beethoven Fund in her spare time. There were no paid workers, no office rentals, and no high overheads. With the cooperation of great musicians, actors and members of The Royal Family, the Gala Concerts organised by Ann, at the Festival Hall and Barbican raised many thousands of pounds for the purchase of instruments and the training of teachers of the deaf.

In 2003, The Beethoven Fund was incorporated with The Elizabeth Foundation for Pre-School Deaf Children, a nationwide charity devoted to the needs of deaf babies and toddlers. Ann is now President of both charities and takes an active interest, visiting whenever she can. In 2017, she arranged a meeting with one of the Foundation’s Patrons, Dame Evelyn Glennie CH, at the Elizabeth Foundation. 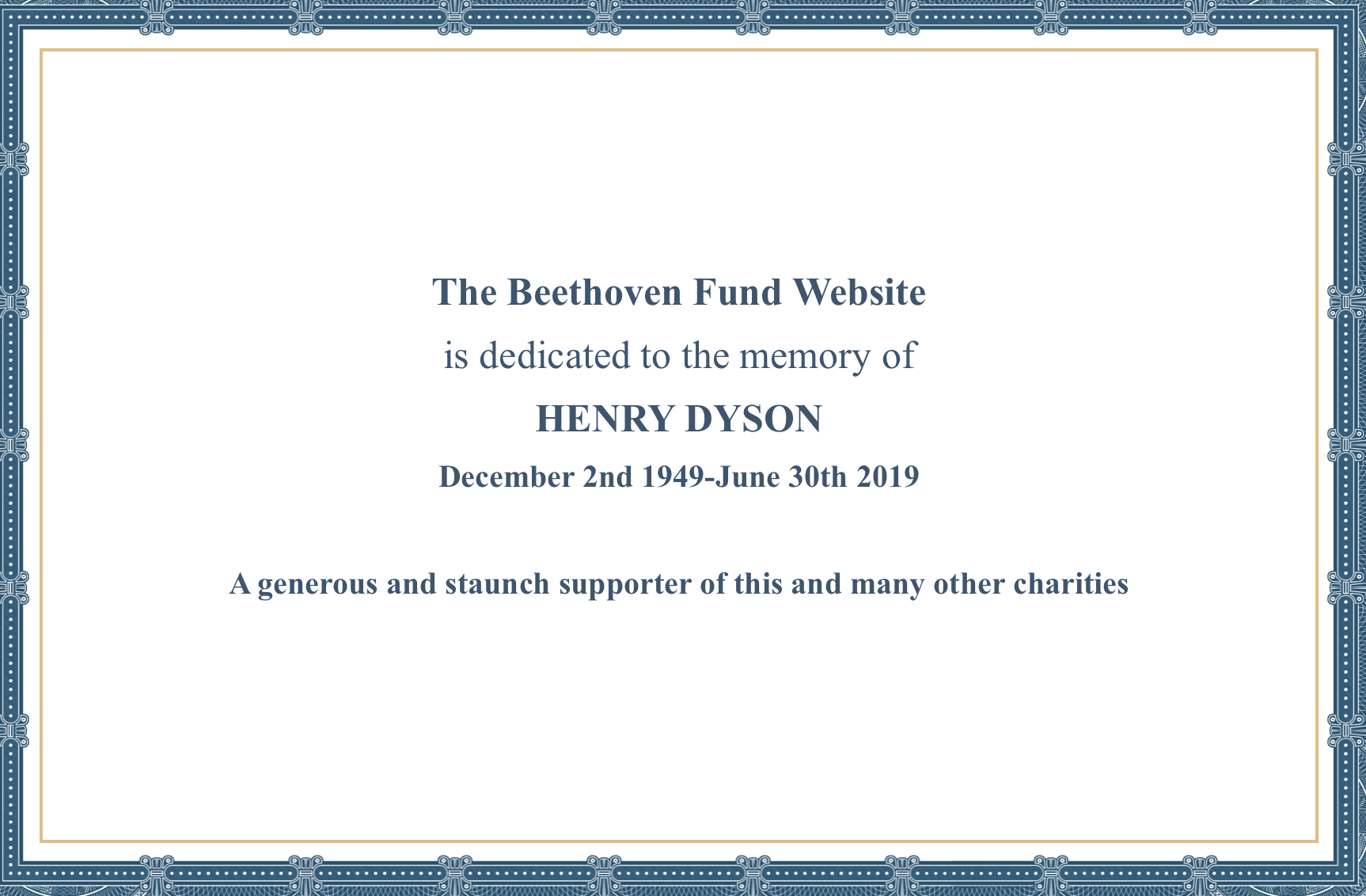 The Beethoven Fund website is dedicated to the memory of Henry Dyson.